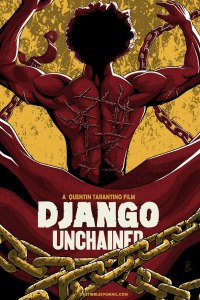 Via means both legal & possibly less-than-exactly-legal, the writers & contributors here at Modern Borefare have seen Django Unchained. Now it’s time for everyone to weigh in with before we turn on each, collapsing into a pile of immature name calling a.k.a the first Modern Borefare Roundtable.

Impervious Rex:
To quote an interlude from Ludacris’ Back for the First Time, “I seen it and I’m addicted!”. I’ve already seen Django twice and could very easily be talked into a third viewing. This is the first movie I’ve seen since Avengers that’s completely captured my attention, from the opening frame clear through to the credits. It’s difficult to see how anyone couldn’t like this movie; my mother liked this movie! And she hates a)crowds b)long movies c)violence d)leaving the house. QT won her over! The majesty of Jamie Foxx in a blue velvet fancy-lad outfit won her over! Django definitely hits all the QT marks: snappy dialogue, obscure-yet-cool music, self-indulgence, revenge, and incredible displays of violence. I think the only thing missing was an extended foot montage to satisfy Tarantino’s toe fetish. Though there was a bit of a training montage, wasn’t there? Also, Christoph Waltz is my new beard role model.

KentuckyJay Headstone: I’ll have to catch that one on the Redbox – Tarantino’s a hard sell in this neighborhood – I was bored by Pulp Fiction & Reservoir Dogs.

adam: The wife and I  just finished the djangs. First off, shocked she survived 160 mins of movie. Second, I won’t say I hated it but I can say I did not enjoy it. We have a legit difference of opinion on our hands! Tarantino certainly does not make boring movies. Django’s bloated running time breezes past, thanks largely to the director’s trademark pithy dialogue and outstanding pacing. Christopher Waltz and Sam Jackson are pure cinematic candy. It’s impossible not to enjoy Waltz’s hyper-articulate monologues and Jackson’s belligerent subservience. Yet for all that, this is Q’s least engaging movie since Jackie Brown, possibly ever. There is simply no tension outside the brief comedy-of-errors dinner scene. Is single-minded ragemonster Django ever in any real danger? Even when he’s hanging from his ankles, naked, with a knife to his nuts, did you think for a moment this inexplicably skilled killing machine wouldn’t eventually lay waste to an entire army of racist white dudes? Of course not. Because Django Unchained – with its one-dimensional Heroes and Villains spraying unlimited and curiously explosive bullets at one another – is a cartoon. It’s visually striking, amusing and intelligent, but a cartoon nonetheless.

Shallow Ma Gu: The film strikes me more as a character piece with meticulous care used to present beautiful imagery as well as the brutality and inhumanity that was the driving force behind slavery. The plot is full of strawmen bad guys that we can see, as an audience, are no challenge for Django and the Doctor. I think Tarantino wants us to revel in the essence of the lead characters and be utterly repulsed by the depictions of human bondage, while it all plays out in a directorial pastiche of spaghetti westerns. The plot is irrelevant, it’s only purpose is to prop up mighty Django and shine a light on the vile things that happened in 19th century America.

impervious rex: @adam: I can see the bloated criticism; I knew it was a ~3 hour film going in but it didn’t FEEL like 3 hours to me. Hell, 40 minutes into Skyfall I was looking at my watch. But i don’t necessarily equate tension with engagement; the set pieces, the dialogue, the what’s-going-to-happen-next is what kept me interested. As for cartoon, you could say the same about the last 15 minutes of Inglorious Basterds. Maybe this is just the endgame of QT’s filmmaking; like the House of Blue Leaves scene from Kill Bill vol.1 wasn’t a pure cartoon as well?

@SMG: I think your strawman argument is spot on; one of the notes that I took when watching it the second time was, “Am I actually rooting for the Doc & Django to get their comeuppance at Candyland, because this has seemed far too easy up to this point”. Like in a game, when the first 80% of a level is too easy, you now that something terrible is about to happen and it’s the anticipation of that event that drives you forward.

Generally, I also wanted to know what was up with the lady with the bandanna over her face; it’s Zoe Bell and QT had some plans for her that ended up getting axed late in the editing process.

adam: You took notes? I concede.

IR: You concede to my note-taking skill? Damn, I knew I should’ve finished those law school applications.

KJH: Christ, I am seriously getting a bucket of “Odd Man Out” Black Java poured all over myself with these posts….am I the only Fish in the Sea who memorized the Qs and As in the Sega Genesis Jeopardy game? *please answer this question while listening to “What’s the Matter, Man?” by the Rollins Band, one of 1000 songs soon to be featured in my 1000 songs list…*

IR: Where would you guys rank Django, from #1 to whatever, in the list of QT movies you’ve seen? I’d go 1)Pulp Fiction 2)Reservoir Dogs 3)Django 4)Inglorious Basterds 5)From Dusk ’til Dawn 6)Natural Born Killers 7)True Romance 8)Anything else 9)Jackie Brown

ViciousPuraHead:  I find that most QT films are pretty serious in nature with some quirky clever dialogue mixed in, but I felt with this film he meant to make it a comic movie first before a serious revenge flick. Almost as if he knew the material was going to be subject to criticism for its take on slavery so he knew he had to make it a comedy to take some of the attention off of the real crux of the story which was slavery. All of QTs films have the same formula really, Short and brutal action scenes, a lot of gore and memorable characters. This film, however, I felt this film did lack the clever dialogue and monologues that you find yourself repeating for days on end. Maybe he peaked to soon with his Pulp Fiction script because I cant name another movie where some of the most inane, conversational dialogue seams to just stick with you and hilarious in its own way. I also felt the same way about Inglourious Basterds, good script and intense characters but I left both of these movies without remembering a line that I felt myself thinking about.

SMG: Death Proof, Reservoir Dogs, Inglorious Basterds and Pulp Fiction are my favorites from QT that I like to rewatch regularly and that is probably the order in how important they are to me as cinema. Django Unchained won’t ascend to my “It’s Time to Rewatch Tarantino’s Best” playlist simply because of those brutal moments within that had profound effects on me. It’s a great movie and a cultural achievement but that achievement comes along with an emotional cost that I am not looking forward to paying again.  ** It should be noted that I rarely rewatch movies and when I do it’s to feel comforted by the nostalgia. DU is no mashers with gravy. DU is complex and bitter like unsweetened cocoa (and worth experiencing because of it).

adam: There’s no denying DU featured some terribly brutal scenes, but I’m curious to know what you found profound and/or complex. Certainly not the story, which is essentially a standard quest to rescue damsel and kill bad guys. And certainly not the overriding theme, slavery is bad.

SMG: Not complex at all, but definitely profound. I honestly have come away from the movie with zero respect for anyone who owned a slave. There are a lot of implications for that going forward in my life looking back at history. Now when I join in on the common criticism that goes something like “The founding fathers were all landed slave owners, so let’s carefully consider what they thought was good,” I mean that any who owned a slave should be entirely disregarded as decent human beings. As a politically minded fellow with an interest in constitutional law, that’s a profound change and all courtesy of several scenes in Django Unchained.

Oh I see what you mean by complex, where I mentioned it in the flavor simile. I just meant the movie needed a lot of emotional parsing for me, provoked a lot of thinking.

@VPH: I’m a bit flummoxed over your categorization that this (and by extension, Inlgorious Basterds) weren’t good films because they lacked “memorable” dialogue. Are you saying that both DU and IG aren’t good MOVIES or aren’t good QT movies?

adam: I’m with VPH. For some reason half the lines in IB sounded like, “Myeh myeh, boogliugli. Hauh hauh hauhn!” Sometimes Tarantino’s slang is just impenetrable.

VPH: I said nothing about whether they were good or bad movies. I can watch the opening scene and bar scene of IB many times because of the great acting and sense of urgency that both scenes create. I would give both IB and DU 3.5/4. I believe that what made PF a 4/4 masterpiece was the many amounts of dialogue that stay with you for years on end.

IR: Do they REALLY stay with you for years on end? I get what you’re saying but the hyperbole of it strikes me as odd. Alright, unless you guys have something to add, I think we can say it’s a wrap on our first MB roundtable!

KJH: Yeah, I have something to add: when you roundtable 70’s Disaster Movies, y’all gettin’ schooled…or thrown into a pit of crocodiles.

Trailer Park: Borderlands WHOOOO, Am I Going to Have to Buy a Vita, Who is Batman & What Does Marcellus Wallace Look Like?

No game coming out this year fills me with such giddyness & joy as Borderlands 2.

Assassin’s Creed III Liberation looks so good I kind of want to buy a PS Vita.  I can’t, I mean, really.  When would I ever have time to play it? Still, watch the trailer; you’ll want one too.  To make matters worse, there’s a sweet bundle too.  Maybe I can get one cheap off of Craigslist or something.

Are you Batman? Are you?

Say “Our Princess is in Another Castle” Again! I Dare You!