Is this why they are cancelling all the X-Men books?

END_OF_DOCUMENT_TOKEN_TO_BE_REPLACED

I forget who said it/where I read it, but someone said this animation should open every Marvel Film. You know, I could get behind that. From Blackmeal.

Probably Not What Valiant Meant But…

YA BURNT. Even Arnold knows it.

Panel Picks – Back in the Four Color Saddle Again

As I’ve been busy stuffing myself with every form of candied & alcoholic body poison I could get my hands on for the past (2) month(s), all of my panel picks have been sitting around, gathering digital dust. NO MORE. I could dole them out to you but PSHAW. Besides, that’s why page jumps are for. So to quote everyone’s favorite modern day philosopher-cum-culinary wizard, “Come along and ride on a gangster’s paradise”. Wait, no, that’s not right.

Let’s start off on a negative note! MAN do I hate this panel. That may be the worst looking Hulk I’ve ever seen in a comic. I know he’s supposed to be a goofy green monster who wears purple pants, but he’s also The Strongest One There Is. Don’t make him look like The Most Retarded One There Is. Also, the Avengers has a pretty deep roster of some serious powerhouses; if you’re going to an alien planet, don’t you want them, not the Black Widow & Hawkeye? Oh, the Black Widow is going to seduce the alien squid king? NYET.

On the flip side, this I REALLY like.  Pretty majestic posing on Cap’s part and a fairly deep roster of Avenger ass-kickers behind him, though I was hard pressed to name them all. Also, is that a tear on Cap’s face or has his Breathe Right strip come loose?

The Joker’s face gives me a bad case of the willies. What must the inside of his peeled-off face smell like that this point? Extra creepiness points for the sweat (drool?) hanging off of his chin. And the fact that there are FLIES CRAWLING AROUND INSIDE OF HIS FACE.

Ok, now it probably smells worse. This reminds me of that scene in the second Preacher arc where Cassidy’s friend-turned-serial-killer cuts a guys face off, then nails it back onto his skull. Upside down. Garth Ennis is a daaaaaaaaaark dude. The visual of the Joker’s eye’s peering out of his own stretched-out mouth is…a disturbing one that I will be including on Christmas cards this year.

Haw haw he sure does murder a ton of people!! Oh, that Logan!  Why yes, he DOES watch over a large number of children, why do you ask?

I really had no idea where Bendis was going with this arc in All new X-Men; apparently I can’t see the forest for the trees as it was(ed.note: umm…duh) a way to re-

introduce Jean Grey to the Marvel U. Must suck to be 16 though, and be told by a huge dude who’s covered in blue fur that you’re going to die. Multiple times. But is it any worse than wearing that yellow-and-green costume? Where do the X-Men even get their costumes from? Does/did Charles Xavier have a seamstress & a tailor on staff? “More pouches, dammit!” every X-team member, 1990 – 1999.

WAY more after the jump, including some super blasphemy, missing limbs & brain odors to start off 2013 right!

END_OF_DOCUMENT_TOKEN_TO_BE_REPLACED

This Week’s Comics Haul – Is Time No Longer a Thing?

Didn’t I JUST buy the previous issue of most of these titles? What is going on? Does my understanding of how time works no longer apply? Bah! Questions for later; comics to read. 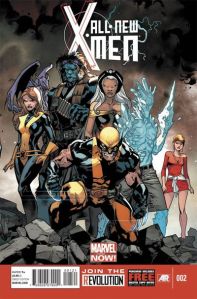 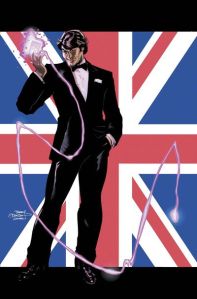 You know, I picked up Journey into Mystery 646 (start of the non-Kid Loki JiM) featuring Sif and it wasn’t bad! It’s not my new favorite or anything, but I’m intrigued enough to see where it goes. Panel picks will be up later in the day to showcase some of the other books I read last week. In other news, Uncanny Avengers handily wins Cover of the Week this week with the crazy good Red Skull cover by John Cassaday. Glad to see that Before Watchmen returns after it’s weirdly long hiatus, with Ozymandias, which is probably the best book of the lot.

– Not going to lie; Shadowman #1 was “meh” at best.  Hopefully this isn’t how the rest of Valiant’s second tier titles are going to go. Never fear though, there’s a new Archer & Armstrong this week to clear away the bad taste.

– Because I’m a sucker who is terrible with money, I am getting on board with at least the first one or two issues of the Marvel NOW! relaunch/rejigger/re-whatever that is happening in the wake of AvX. Iron Man last week wasn’t bad! Let’s see what Matt Fraction can do with Marvel’s First Family.

– New Locke & Key. That’s all that needs to be said. I want to treat this comic like I treat Homeland; it’s so good that I can’t bear waiting one second more after it’s over to start the next one.  Go to your local library and pick up the trades!

– “Death of the Family” continues in Batman & Robin and Batman this week.  Death in comics is a tricky thing; you know it’s not going to be forever, but at the same time it’s a great talking point & sales generator. But when you’ve been reading “Death of…” stories for 20 years, they kind of lose their gravity. But crazy Joker antics = take my money.

– After 72 issues, The Boyswraps up.  Not in the same ballpark (or even state the ballpark is located in) as Preacher,but still clever & interesting enough at times to warrant picking up here and there.

– Saga is so weird/charming that I keep getting it because I need to know where it’s going. Also the robots with fancy military uniforms & televisions for heads. I like them. ‘Cause they have TVs. Where heads should be.

– As for the rest, that’s just reflexive grabbing & impulse purchasing: Gambit, Thor, X-Men. Passable but most likely not life altering. But who knows? Maybe Marvel NOW! has got some tricky sleeves & Gambit is able to recapture the charm of the first issue.

What are you buying this week?

– “Everything Burns” wraps up this week, convienently to coincide with the launch of the much maligned (by me) Marvel NOW. Here’s hoping for an adequate payoff for such a buildup.

– Valiant stuff keeps getting better; I had the chance to talk with a couple of Valiant execs at NYCC and even though I may have come off like a fawning, sweaty fanboy (like all fanboys, ever) they were generally very enthused to hear from me and talk about the future (a little bit) & direction they were headed.  Confirmed that Turok, Solar & Magnus were probably lost and gone forever, but the rest of the cast & crew of Valiant will be showing up with increasing frequency over the course of the next 18 months.  I asked them about Rai and was told, “Just wait, we’ve got big plans for Rai.”

– How ’bout that Daredevil cover? Wow.

– Depending on what happens in Wonder Woman, I may drop the book.

This Week’s Comics Haul: Not So Many Comics, But At Least Now I Can Buy Lunch

– I’m only buying Uncanny Avengers because up until I have it in my hands, I refuse to believe this is an actual book and that’s its actual cover.

– Archer & Armstrong continues to be an incredibly fun read.

– Guess who’s back? Back again? Joker’s back. Tell Batman. (Remember when Eminiem was a cultural force?)

Well, He Does Have A Point (or Six)

Relevant or not, Wolverine certainly seems to be in more monthly books than any other Marvel character. Though both Deadpool & Spider-Man are having a go at the title.

Wouldn’t it be amazing if, one month when Logan is in space in the Wolverine & The X-Men book, he wasn’t also in a dragon-infested tunnel halfway to Japan? Then again, a month is a long time. Maybe he’s in space from the 4th – 9th then ends up in the dragon tunnels from the 16th – 23rd? With an all X-Men hands on deck softball game on the 13th? Continuity, you are a vexing and fickle concept!

– How incredible is that Rorschach cover?

– Both Defenders and Sweet Tooth are wrapping up soon; savor them whilst you can!

– I’m super stoked for Rot World.  Animal Man & Swamp Thing have been the absolute best thing since the New 52 launched.  Let’s hope DC can keep it going for another year (strong doubts).

– Image’s Danger Club is super violent but really compelling.  Interesting villain too, without spoiling anything.