My body is melting.

Well…not really in any technical sense. But, I’ve mixed together my creative high weed and my body stone weed and imbibed generously. So my head is limber and ready for some sideways and backways reasoning and perceptions, and it’s coated with a nice syrup of body warmth that sort of feels like melting. 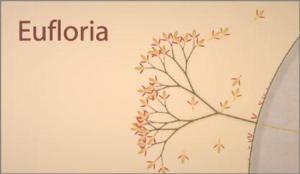 Time to jump into Eufloria in my stoned rumination form of a Let’s Play. The general list of my pre-conceptions as I stand now are these:

Eufloria has been available on PC, Linux, PSN, iOS and Android platforms for some time now (Feb 2012 release for iOS was the last one). I’m engaged in the PC version I picked up in a Humble Bundle awhile back.

The game has a simple, bleak, yet soothing aesthetic.The background music is ambient pipes and keyboard tones, very laid back. I’m not sure if I like how the game and interface sounds clash with that slightly. Your mouse clicks and notification sounds within the game are all crisp ting ping noises that sound like iOS style notifications. The juxtaposition of the chilled out music and the sharp sounds fails for me. However, it could completely be THC screwing with my brain.

Visually, the game is stunning in both it’s charming simplicity and its scope when it comes to zooming in and out. You can zoom out to see the whole of your plant empire in it’s abstract glory, or zoom way way in to see a single seedling full screen. The transitioning is nicely done between zoom levels and the game even abstracts its already abstract graphics to symbols when zoomed out to its furthest, so you can tell what kind of plants are on each asteroid at a glance. 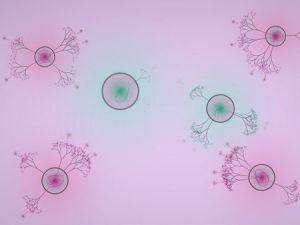 You direct hordes of seedlings around from asteroid to asteroid, sacrificing some of the horde at any time to plant trees that, in turn, slowly produce more seedlings…so you can reach more asteroids. Eventually you run into enemy seedling hordes (even sentient plants are war like apparently) that you need to overpower through sheer numbers mostly. It’s an exercise in trying to be as efficient as possible (in real time) in your movement of seedlings in batches, timing of planting new trees and prioritizing where you confront your enemy. In theory, the enemy is doing the same thing to you.

It’s the real time strategy game broken down into it’s most simple and necessary components. You only have one “troop” type (seedlings) for most of the game that are both your fighters and builders. You can only build what amounts to a traditional RTS base at predetermined nodes (asteroids). There are only two types of production buildings (plants) that I’ve seen thus far. They consist of the aforementioned seedling factory type plant and a brutally vicious defense turret type plant that has to be overcome with massive numbers of your “stronger” seedlings grown from certain choice asteroids. The levels are procedurally generated, so you may find a holy grail asteroid whose plants crap out AMAZING seedlings that are fast, hardy and deadly. Or maybe you just get lumbering HP powerhouses that don’t hit very hard or any other combination of the three attributes. You can sort through the seedlings by extraordinary attribute with only two clicks, so it’s easy to send the right seedling horde for the task at hand.

It comes down to efficiency in your seemingly simple choices. There is nothing like base rushing because of the effectiveness of even one of the defensive turret plants. You need to expand, defend and build hordes of seedlings to overrun the enemy in orchestrated attacks. The pace in doing so is not particularly rushed at the difficulty I’m playing at, but human opponents could ramp up the urgency I suppose. It really is pleasant and meditative busy work that rarely feels panicky or rushed, which seems perfect for an iOS or Android diversion.

I realize I’ve said simple a lot, but there is some complexity underneath it and it is a pretty game. If the price seems attractive to you for a light RTS pastiche, I say jump on it and see if it rubs you the right way. I can easily see returning to it for a few hours to finish the single player challenges and diving into some multiplayer matches once or twice a week until I’ve conquered all that stand before me.