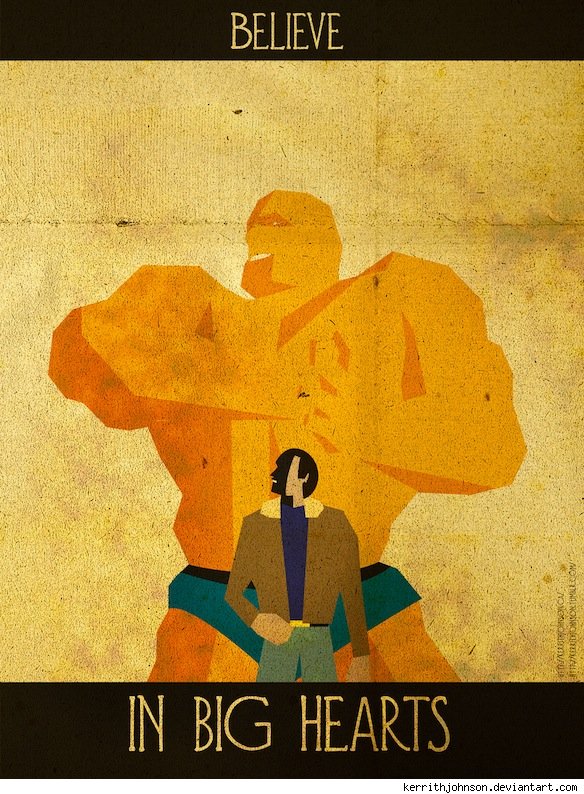 Kerrith Johnson has turned heroes and the ideals that they embody into minimalist motivational posters that are really quite clever. Check out more of Kerrith Johnson’s art on his deviantART page. (all via Comics Alliance)

Weekend Links: I May Not Excel at Sports, but Posting Fantastic Links? That’s Where I’m a Viking.

– I’m not sure what your deal is, but I loved both Fallout 3 & Fallout: New Vegas (crippling bugs aside). The only reason I know Olney even exists is because I know it was lousy with Deathclaws in FO3. Well now you can get out your blue books and get ready to compare & contrast, because some mad genius traveled around to various spots taking pictures of places that appear in the Fallout games.  Brave man; hope he had a Power Fist with him.

– Fill ‘er up!  The 10 Best Board Games Available on the iPad. I keep meaning to buy Ticket to Ride but then I keep getting distracted by Magic: The Gathering 2013.

– Remember the other week when I raved about Batman Incorporated #2?  Well much like the GENIUS LEVEL Watchmen annotation site (which is a must read, regardless of your familiarity with the series) Comics Alliance is annotating Batman Incorporated.

– You would think Superman would excel at the Interplanetary Olympics.  Turns out, not so much.

– Can I even begin to tell you how badly I want this:

the problem is, these comics are only available on a non-mobile platform. What good does that do me?  If it was available via iPad I’d be all over this. It would, in fact, be on like Donkey Kong. But no. Sads.

– Have an awesome weekend! I’m heading to the moon to play tennis with Don Cornelius.

AvX #6 – – reminiscent of The Authority.  Cyclops still auditioning for lead singer of Cameo. Hope actually looks like a teenager. Emma is wearing something wholly impractical. Thor v. Cyclops! Ok, this book has definitely redeemed itself, especially with the final panel & Cyclops pronouncement. This could actually be leading to something bad-ass! I will definitely stay tuned.

Before Watchmen: Comedian #01 – I’m starting to come around on these Before Watchmen titles. This offered some interesting twists on established ’60’s myths, so I applaud them for that.  The one thing that always bugged me about Watchmen  was, if seemingly everyone knew Eddie Blake was The Comedian at one point in time, why was everyone then so mystified & amazed when Rorschach uncovered Blake’s secret costume stash in Watchmen#1? Did everyone forget? Answers people! I need them!

Daredevil # 14 : A Date with DOOM!: Ok, it’s not really called that, but Dr. Doom does show up up.  In fact, last we saw Matt he was trapped in a box in Castle Doom in Latveria. HOW. WILL. HE . ESCAPE? I ain’t saying nuthin’ beyond “clever premise.”

Fables #118 – a terrifying twist I didn’t see coming. Much creepier than expected.

Grim Leaper #2 – Still an interesting premise, but the last panel, while disgusting, also introduced a brand new character  that had me leafing back through the book trying to figure out exactly who was being talked about. Hate that.  Though I dug the little 4 part EC Comics-esque story in the back, which featured a whole new disgusting way to kill someone.

Saga #04 – I guess Vaugh takes a while to get going.  The story is definitely ramping up and there’s super bizarre things popping up in every issue.  I just hope he starts to unveil a bit more of the narrative soon.

The Dark Tower: The Man in Black #01 – First off, The Stand  is one of my ALL-TIME favorite books (the unabridged version, of course). Odd then that it took me until just two years ago before I picked up The Dark Tower. While the comics were cool and some beautifully illustrated, they just felt like re-treads on something I’d just read.  I picked this up as a way to hopefully shine more light on one of King’s strongest creations, Randall Flagg a.k.a The Main in Black a.k.a The Walking Dude.

The Punisher #12 – Frank still has one eye, but that doesn’t stop him from stomping his female quasi-partner senseless in a trash-filled alley over a picture. Why am I still reading this?

The Walking Dead #99 – Set up set up set up.  Issue #100 promises to be huge.  At this point, how can they not kill Rick?  I think that’s the safe bet.  Or even crazier, EVERYONE gets eaten and they just end the series that way, on the darkest note possible.

Uncanny X-Men #14 – Did Mr. Sinister just say he was a eunuch? Regardless, an XCELLENT (see what I did there? That’s called laziness.) return to form here.  Mister Sinister, here in his current role as devilish 19th-century English gentleman, shines as a an almost unparalleled mastermind.  Really, like Lex-Luthor-from-Red-Son type shizz. From the interesting twist on “let loose the hounds!” to learning how far his genetic manipulation & cloning goes, Sinister as a serious threat is back. Pick this issue up.

Wolverine #308 – I can already tell this is going to be terrible…(opens cover) yep, I was right.  This is clearly House of 1000 Corpses / The Devil’s Rejects, just set in the Marvel U. & starring Wolverine.  It also seems that the “brain-wash Wolverine to be a secret killer thing” has gone beyond trope & into the realm of cliche. This was was much better done in Mark Millar & John Romita Jr’s Wolverine: Enemy of the State.

Wonder Woman #10 – Not as good as past issues but it does feature an interesting escape from Hell and a dog-headed medusa gets head-butted by an Englishman. HEADBUTTS FOR ALL.