Jonathan Hickman lays out the details on the Avengers in a post AvX world. Best part? Return of the Illuminati. What a cool concept. The idea of a “good” secret society of Marvel heroes who, with everyone’s best intentions in mind, usually seems to screw the pooch? THAT’s the cool concept. Bringing back someone else’s cool concept is, well, lazy. WHO CARES MOAR ILLUMINATI. But probably not the one from Disney’s Gargoyles. Whose idea was it to insert a super bizarre, world spanning, brain jarring conspiracy into a children’s cartoon? Whoever it was: Bravo, sir. Bravo. That led me directly to Shea & Wilson’s Illuminatus! trilogy, which placed a multitude of bizarre ideas directly into my cerebral cortex. You could say that, part of the reason I am the way I am today is based directly upon the Disney Afternoon. Let that marinate.

Link to Hickman talkin’ those post-AvX blues via io9.

Well, He Does Have A Point (or Six)

Relevant or not, Wolverine certainly seems to be in more monthly books than any other Marvel character. Though both Deadpool & Spider-Man are having a go at the title.

Wouldn’t it be amazing if, one month when Logan is in space in the Wolverine & The X-Men book, he wasn’t also in a dragon-infested tunnel halfway to Japan? Then again, a month is a long time. Maybe he’s in space from the 4th – 9th then ends up in the dragon tunnels from the 16th – 23rd? With an all X-Men hands on deck softball game on the 13th? Continuity, you are a vexing and fickle concept! 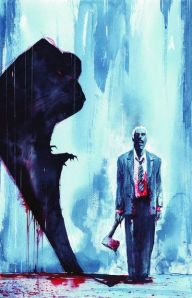 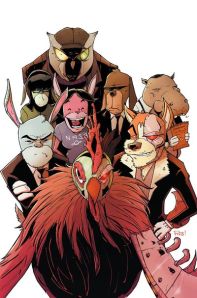 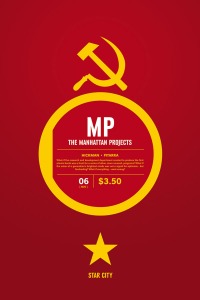 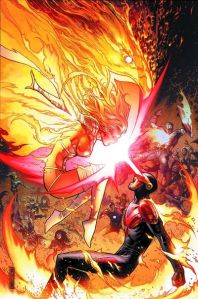 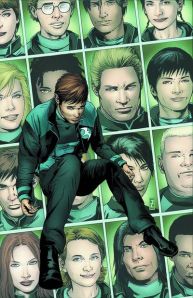 Take a look at the interlocking covers for what looks like the first two issue’s of the Marvel NOW reboot/re-whatever of The Avengers by Jonathan Hickman and Jerome Opena.  So who answers this call this go ’round? From what I can tell, it’s Captain (formerly Ms.) Marvel, maybe Cannonball, some mystery dude to the bottom right of Captain America, The Hulk, Wolverine, The Falcon (he sucks, right) The Black Widow, Thor, The Human Torch (?), Iron Man (with some badass new armor) Spider-Man, Hawkeye and Spider-Woman.  Time will tell about the series overall but this cover is still cool as hell.

SIMPSONS DID IT. Years after The Simpsons made the joke about the comics industry’s increasing need for one-off gimmicks to continue to sell books, Marvel comes bumbling along with Marvel Babies. Luckily, these are just variant covers for the upcoming Marvel NOW books, though there will be an A-Babies vs. X-Babies book. Can’t wait to pick that up! Plus, seeing as how they’ve already visited zombies, apes, noir, the dystopian future, and the Renaissance, I guess babies were due. 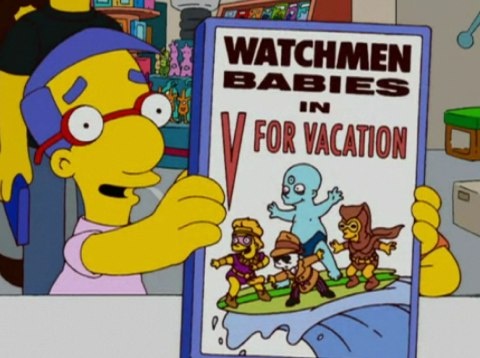 Upcoming cover art for Marvel titles, including AvX, AvX Consequences, Winter Solider, Dark Avengers, Marvel NOW, and Wolverine and the X-Men. The final issue of AvX is slated to hit in September leading into the launch of Marvel NOW in October, which isn’t a re-boot or a re-imagining or a re-launch or re-levant (ha). Marvel Heroes: Never Stop Punching Faces.

The League of Extraordinary Gentlepersons 1996

Who’s a part of this newest iteration of the League? Leave answers in the comments! (Via Comic Alliance)

I’ve been reading Antony Beevor’s heavy-duty and fascinating D-Day, which started out as a somewhat masochistic attempt to fully understand World War II, piece by piece.  But it’s so good and I’m completely obsessed with it. Regardless, time to put that aside ’cause its’  New Comic Book Day!! What are you getting this week? Slim pickings this week for me, but all titles I’m really looking forward to.  I would rather have a half-dozen excellent books than a dozen so-so titles.

Look, I agree I might be a bit obsessed with Cyclops’ Phoenix-Force mandated thong, but clearly so is Marvel. Why else would it be so prominent on this cover?

In this issue, Cyclops shows up to K’un Lun ready to wreck shit (preferred) in his quest to bring Hope back home (less preferred). Everyone gives it their Avengers-brand® all, but of course it’s not enough. Look, you would think that in 50 years of defending the Earth from threats ranging from small time crooks to reality-devouring villains, the Avengers would know that individuals who tend to both glow and float are generally a large problem.
Yet you’ve still got Hawkeye out there, ready to bounce a few arrows harmlessly off of Cyclops’ face.

That, of course, goes about as well as could be expected, with Cyke just DOMINATING everyone then afterword throwing some shade the Avengers way. Man, Phoenix Force Two Cyclops is kind of a dick. 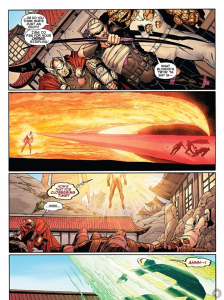 You know that bottom panel is just begging for a Kirby-esque “KRAKKA-DOOM!!!” Plus, awesome call back to on of my favorite bits from Fraction & Aja’s Immortal Iron Fist, where they used to put all of the moves employed by Danny & his fellow Immortal Weapons into little captions. Dance of 1000 Monkeys! Shattering Palm Strike! Brooklyn Headbutt!

I also really enjoyed seeing Cyclops out of his element for the first time in this series and just dumped on his ass after hovering about, lording it over everyone.

Anyone wanna bet that next issue features Cyclops heading back to Earth after recovering from the ass-kicking Hope gave him, dispatching Emma via first round rear naked choke,absorbing all of the Phoenix Force and then just going bonkers?

Here’s the music video that really inspired Cyclops when it came time to put together his new costume:

I really can’t wait for this event to be over.  Then again, that means Marvel NOW! will be kicking off and I’m not exactly sure how thrilled I am for that.  Hmm.  QUITE THE FIENDISH LITTLE CONUNDRUM, MARVEL. Quite…the conundrum.

Get comics at your local library!

Get comics at your local comic book store!

Don’t know where your local comic book store is? Problem solved. Never read a comics before? Intimidated by 50+ years of continuity? Can’t even fathom where to begin? No sweat; Kotaku’s got you covered with a How to Get Into Comics guide. It’s super helpful!

There is more information at the official Read Comics in Public Day website. This year it happens to coincide/purposefully being held on the birthday of Jack “King” Kirby. All hail the King!