Unsure How To Feel: Georges St. Pierre to Play Batroc the Leaper in Captain America Sequel?

Via  MiddleEasy and SuperHero Hype comes today’s hot rumor: UFC Middleweight champion/ultimate wrestlefucker is set to play Georges Batroc a.k.a Batroc the Leaper in the upcoming Captain America sequel, The Winter Soldier. How many grains of salt do you have? You will need them all for this. But if true…is this inspired casting or just stunt casting? 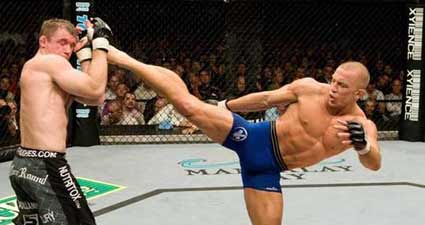 So just who is this purple suited jumping guy? Well, according to Wikipedia and my own brain, Batroc the Leaper is a master of the French martial art savate, the sole (ed note: haha) purpose is to teach you AMERICAN SWINE some respect. Or just making with the face kicking, I don’t know.  There’s the link, you go look. Also:

Batroc has no superhuman abilities, but is in peak physical condition in every respect. He is an Olympic-level weightlifter and has extraordinary agility and reflexes. His leg muscles are particularly well developed enabling him to leap great distances with the equity of an Olympic athlete. He is an expert hand-to-hand combatant and specializes in savate (French-style kickboxing). He is also a skilled military tactician, having formerly been in the French Foreign Legion.

Batroc is also an experienced thief and smuggler, and can speak both French and English. Although, as a mercenary, he does not hesitate to perform any number of criminal acts for his clients, Batroc has, by his own rights, a strong sense of honor, and he will turn against any client whom he feels has unfairly deceived him into committing crimes to which he might not otherwise have agreed.

Hell, you can watch the Human Weapon episode about savate right now:

“Look out Cap! He’s using the jab to set up the takedown! Ahh, dammit. Well, he took you down.  No worries though! He’ll just lay on top of you until I ring this buzzer.  Once he let’s you up, just smash him with your shield a half dozen times & we’ll call it a day.”  – every onlooker ever when GSBatroc shows up.

2 thoughts on “Unsure How To Feel: Georges St. Pierre to Play Batroc the Leaper in Captain America Sequel?”