I have no use for Instagram. I think it’s very silly to intentionally make pristine images look shitty. But if you’re one of the bajillion people who heart grainy resolutions, washed out colors, and lens artifacts…hoo boy, have I got a movie for you. 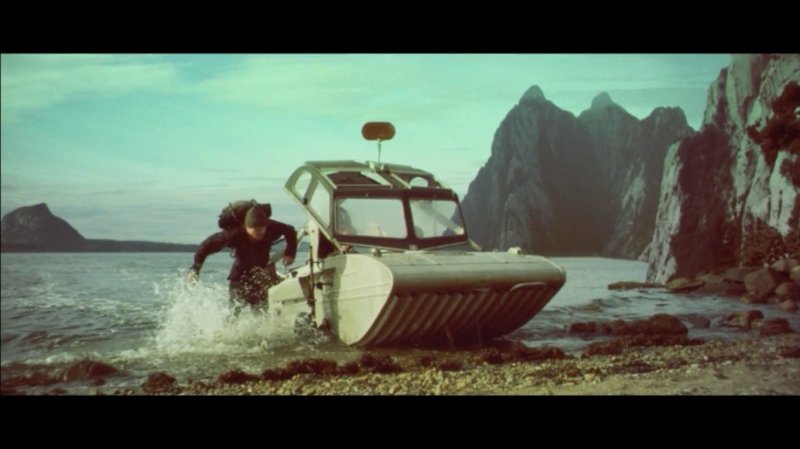 Available for free on Netflix and $3.99 on Amazon, Norwegian Ninja (2010) is presented entirely in an excellent imitation of velvety, low contrast, 1970s-style film stock. It’s a bit much for my taste but you kids and your Instagram should feel right at home. And who doesn’t love a good foreign sci-fi spy comedy?

I could tell you all about how the plot is a farcical alternate history of Arne Treholt, Norway’s most notorious Cold War spy. But really what does anyone know about Norway? Do they have lots of spies or just the one? I  do know that the real Treholt was sentenced to 20 years in prison for colluding with the Soviet Union so that tells you something about the relative severity of Norwegian espionage. The most depraved act of treason in their history netted the same penalty we slap on college kids carrying a pound of weed. Get caught spying in America and we execute you and half your family. GLASNOST, MOTHERFUCKERS.

All that Cold War hoohaw is just window dressing. At its heart Norwegian Ninja is a charming slapstick adventure with a mild but heartfelt undercurrent of national pride. It stumbles at points but there are plenty of cool action set pieces and genuinely funny lines to keep things moving along, not to mention a dynamite disco rock soundtrack. Also there are invisibility suits, analog surveillance drones, submarine motorcycles, tasseled boobies and goats. Quite a lot of goats, actually.

Added Bonus: Rampant anti-American sentiment! At first it irked me that the ultimate evil is the CIA and by extension the entirety of the United States government. (What the fuck, Norway? I thought we had something after that whole Marshal Plan deal.) The more I think about it though, portraying the Soviets as the lesser – or at least more reasonable – of two Cold War evils is fairly novel. It’s definitely not seen in films produced west of the Atlantic so that’s kinda cool, even if it chafes my patriotism just a smidge. There’s one questionable visual reference to 9/11 that I personally found jarring but I don’t think there was any malice behind it. It certainly didn’t ruin the fun of the film; it was just a little odd. Though odd is a relative term in a movie that routinely employs feng shui force fields. I thought that gag was pretty clever, even after I realized feng shui is Chinese and ninjas are Japanese.