Age of Ultron Is (almost) Here, But So Are the Gimmick Covers

Let’s hope Marvel doesn’t ruin the nice thing they’ve got going with a return to the comic-market killing gimmicky ways of the ’90’s; poly-bagged, chromium, glow-in-the-dark, quad-gate foldouts, non-stop collectible #1’s…maybe this foil cover for Age of Ultron is just a one-off and not a sign of things to come.  This is how it ends; not with a bang but with a limited edition, poly-bagged, one-of- seven-different-cards-included whimper. THANKS ULTRON.

Written by Brian Michael Bendis with art by Bryan Hitch, it looks like  Ultron is back to wreck havoc on The Avengers. Last time he showed up, Ultron killed an entire country. Who knows what mischief he’ll get up to this time?

The standard Marvel event boilerplate is in effect:

With the robotic revolution in full force, no fan can miss how Age of Ultron will ultimately change the Marvel Universe leaving no hero or villain unscathed!

But who cares! Crazy killer robot action & menace will get my dollars! And it’ll get them fairly soon; Age of Ultron is set to begin this! very! March!

Head over to Comic Book Resources for more details as well as a brief chat with Brian Michael Bendis. Below, some two pieces of artist Hitch’s interior art for the series. 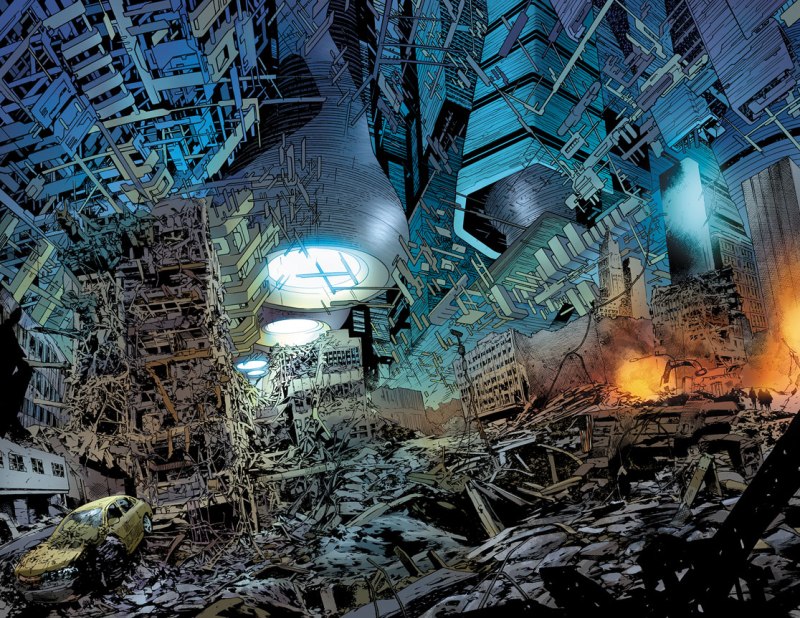 2 thoughts on “Age of Ultron Is (almost) Here, But So Are the Gimmick Covers”