The humble bindle – a hobo’s best friend, but a terrible way to transport comics. At best they would slowly but surely develop a nasty crease; at worst they would be ravaged by the elements or used as emergency band aids/ toilet paper/ prophylactics. No no. We all know the best way to transport comics is not at all. You read them, you bag n’ board them, you file them away in a long box, and there they shall remain until the end of time or until your mother, who doesn’t understand that New York apartments don’t have a ton of storage space and she has a giant house all to herself why can’t she just keep them where they are they aren’t taking up any room besides do you want to be that Mom who throws out the box of Mickey Mantle baseball cards no good then just leave them alone they aren’t hurting anyone and no my brother’s kids can’t read them they don’t know how nor could they appreciate what exactly Chris Claremont or whomever was trying to do in that X-Men arc and besides they have grubby hands and do you want their grubby hands to be what stands between you and the good nursing home when I sell my collection and retire, asks you to move them for the thousandth time.  No, mother. The answer will always be “NO.”

Cover of the Week goes to Batman, Inc! At first I thought Damien was just embarrassed that his parents were going to make out.  But then I got what was going on. Quick on the uptake, today. 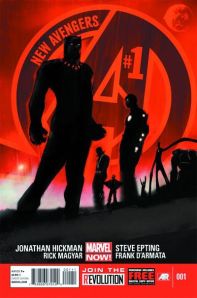