With a Jolt My Mind Awakens

With a Jolt, My Mind Awakens…Chapter Twenty-Seven: Top 10 Reasons Why We’re Still Here…

You can open your eyes and remove your paws from your Honda Civic’s “Oh, Sh*t” Handle…we’re still here. As the title of the post states, let me spell, letter by letter, the reasons for our continuation…

9. The Nets moved to Brooklyn; thus, the WCW Nitro Girls received their first steady income since 1999!

8. Death was ready to shut down his computer and get the party started, but he decided on one last hit from Pandora: the sixty-four minute doom metal epic “Dopesmoker” by San Jose, California’s “stoner rock” kingpins, Sleep…Shhh, Death hasn’t yet awakened…:

7. Universal Permanent Log-Off commenced, but I hollered, “Hey, howzabout one last story?”. Universe relented, and I told them about a Cheeburger Cheeburger-inspired dream from back-a-spell in 2010: I am a Ghostbuster, confronting Gozer atop the skyscraper in the climax of the movie of the same name. The other Ghostbusters are John Cusack, Shaquille O’Neal and Bob Saget. Gozer demands we choose the form of our destructor & immediately announces the choice has been rendered. Angry John Cusack grabs my collar: “What wrestler did you just think about?!!”…Scene shifts to the Chosen Destructor: 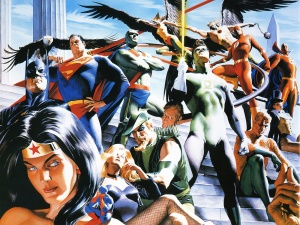 4. Oblivion Choo-Choo became de-railed when Superman tricked it into saying its name backwards, thus sending it temper-tantrum-a-flarin’ back to the 312th Circle of Central Pennsylvania, where it shan’t bug us again for, at least, another 5,000 years, or whenever the movie people get Superman’s story right, whatever comes first…

3. There are two Jewish kids in NJ who really, really enjoy their Korean soap operas, and that relationship is just too strong to sever.

***AND THE NUMBER ONE REASON WHY WE ARE STILL HERE:***

2 thoughts on “With a Jolt, My Mind Awakens…Chapter Twenty-Seven: Top 10 Reasons Why We’re Still Here…”