The Cup O’ Joe panel from Saturday came with your regular dose of space news a la a new, ongoing Nova  and Guardians of the Galaxy series.

Remember when Nova was cool?  Nope, me neither.  But maybe they’ll get it right this time! (via ComicsBeat)

I saw quite a few Jack Sparrows running around the Javits Center this weekend but they were absolutely dwarfed in terms of the number of Deadpools. Just like in the Marvel 616 universe, Deadpool was everywhere. At first it was pretty cool, but also just like the 616, after the 15th Gangnam Style-ing Deadpool you need a change.  The Drunken Moogle (great site name, btw) imagines the two cosplay icons bumping into one another while stocking up on adult beverages. Cosplay note: There were also a ton of Banes and at least two King Hippos.

The creators & architects behind the Batman arc “Death of the Family”, including Grant Morrison, Scott Snyder, David Finch, Greg Capullo and others sat down at NYCC to discuss the upcoming plans for Batman, the Bat-family, the Joker & Gotham at large.  Apparently the rumor is that Nightwing gets killed off?  Hmmm. Sounds like the best panel at the show so far. (via CBR)

Speaking of panels…look, I love the con.  I really do.  But at no point in the past three years have I ever wanted to wait in line for two hours to go sit in an auditorium for an hour and listen to anyone, no matter how awesome they are.  Why? Two reasons that come to mind immediately: One is that THERE IS A CON GOING ON AND ITS GETTING BIGGER EVERY YEAR. I have limited time here, son! I need to cram in all the action I can in the time I have. Two, I know it’s all going to be up on the web inside of an hour anyway.   Yes, I’m not witnessing it first hand but I would rather be out on the floor, scrounging around then just standing in some long concrete tube, waiting.

Speaking of indie comics! I grew up as a Marvel Zombie, later morphing into an Image Idiot, a Valiant Victim and lately turning into a DC Dipshit, but the one thing I’ve never been is an Indie Ignoramus. But now? Chalk it up to finally, after 20+ years, getting tired of guys in their underwear punching each other month after month. I’ve been worn down to the degree that I’m casting about, desperate for something good and fun and clever and funny to read. As luck would have it, I’ve been finding it! Lots of it! I think the catalyst was Lee O’ Malley’s Scott Pilgrim books, though it may go back as far as Evan Dorkin’s Milk & Cheese books.  Things like Double Barrel from the Cannons, Ed Piskor’s WIZYWIG & Hip Hop Family Tree, Jeff Lemire’s well, anything, leading up to my discovery this weekend of Justin Peterson’s Very Near Mint. Which I wasn’t even going to buy but in fact it is so good that I went back to NYCC  an unplanned third time just so I could pick up the second volume.  Buy it. For real. Right here.  It’s GOOD. I’m actually a bit mad about how good it is, because now I have to wait until Spring ’13 to get vol. 3. 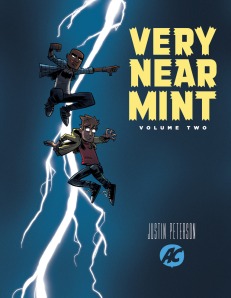 There is also the matter of this excellent Lego Ron Swanson to consider.

And now back to the underwear punchers: Secret Avengers #1 is almost upon us, with an all-new cast of super old characters, just in a slightly new configuration. CBR spoke with the creative team to get the scoop on what’s so secret this time around.

Lastly, something I missed at NYCC that is probably a good thing, as I DEFINITELY would have bought this: “THE 17,000 SINS OF SKELE-GORE” from Scarecrow Oven. Why wouldn’t you buy something as sweet as this:

New York Comic Con ’12 – a great success! Each year the Con gets bigger but somehow it’s also getting better. Can’t wait for next year! The only point of contention is that it’d be great if they went back to how Thursdays were in 2010 i.e. only Press & Pros were allowed into the show on Thursday. But clearly Reed Pop is making a killing selling early access, so it’s doubtful we’ll see a return.

Did you go to Comic Con this year? How was your experience there? What did you get? Who did you see? Let us know in the comments!