Apparently we’ve all been lied to; blowing into your old Nintendo cartridges did not
, in fact, cause them to magically work again. Kotaku (via Mental Floss) wrecks our perception that our precious NES’ were malfunctioning due to malicious dust that was in turn causing Mario to turn into a hellish stew of pixels & squonking noises. In fact, it was Nintendo’s fault that our cartridges weren’t working. YOU BASTARDS.

Nintendo designed its NES connector using nickel pins bent into a position so that they’d give slightly when a cartridge was inserted, then spring back after it was removed. These pins became less springy after repeated use, which make it hard for them to firmly grasp the game cartridge’s connectors.

There was even a warning from Nintendo not to blow into your games, but who were we to listen to instructions? See:

Do not blow into your Game Paks or systems. The moisture in your breath can corrode and contaminate the pin connectors.

Did anyone else use the method where you pulled the game catridge ever so slightly out of the NES’ docking bay, then pushed it down so it mind kind of a “chunking” noise as it was slammed home? That was second tier tech support back in the day! What other methods did you use to get your games working again?

After the jump, (dirty) pics of a blown vs. non-blown cartridge. 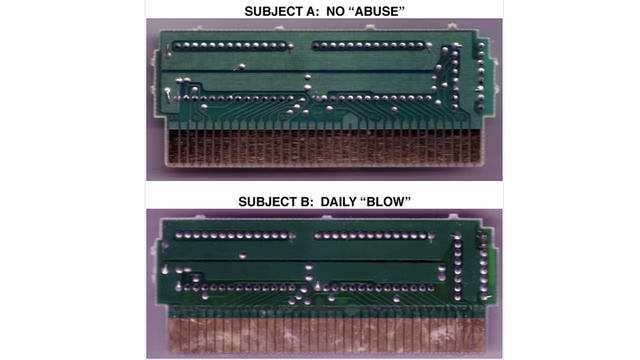 True story: I went to a birthday party for my best friend in elementary school (it was a sleepover) and I brought my copy of the awesomest game ever, River City Ransom. Clearly I thought that RCR would get the party started.  Instead, what it did start was a 16 hour torrent of verbal abuse from the other party guests directed at me and RCR (ed.note: You leave the citizens of River City alone! Children are such monsters.).  While I hate all of those people, I still love River City Ransom. SUCK IT BULLIES, you’re not going to bring me down. YOU WON’T BRING ME DOWN TODAY.