Help Me I Am Obsessed with Outernauts 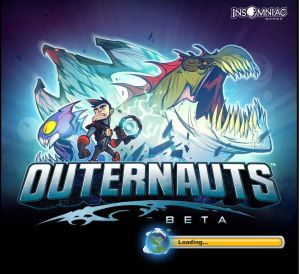 LOOK UPON THE DEVIL AND WEEP FOR THE END OF YOUR FREE TIME. Seriously Insomniac, what are you doing to me? I’d read about Outernauts the other week and basically gleaned “Like Pokemon, but in space AND on Facebook!” from the article.  Then a friend (an agent of evil, for sure) sent me a request under the most Perfect Storm-ish conditions possible (bored, weekend, blahing around on the Web) and now I don’t know where the last 72 hours have gone.

In a nutshell, you’re an explorer of space tasked with finding, trapping & subjugating cute aliens, than forcing them to fight other equally cute aliens, in the hope of forcing them to undergo hideous transformations which will bring about the ability to trap & subjugate other cute aliens, ad infinitum.  The grinding aspect of this game is no joke; the part that seems like a joke but is not (maybe a Killing Joke) is the perfect engine that Insomniac has created to ruthlessly separate you from your money, micro-transaction after micro-transaction. One day your riding high on the hog and then some indeterminate time in the future you’re in the poor house, surrounded by virtual monsters. Because guess what? Every action in the game requires energy, which of course you have a finite amount of. An when you run out (or don’t have enough to fight, which is often) the game will helpfully remind you that you can BUY more energy/building elements/star gems.  The worst part of all of that is that, if you want to speed through some of the grinding or really improve your characters, you must use star gems.  Problem is, you cannot earn star gems in the game; you can only get them through trading real word dollars.

I have thus far managed to not spend any money playing, but I have wandered away from my machine several times to try to find my wallet (unsuccessfully).  I’m not sure how long I can hold out though.  My only hope is that the obsession will fade, just like it did with another Insomniac browser-based game, that had launched in tandem with the last Resistance game.  It was a combination of  Risk, Command & Conquer, and Farmville, only with more explosions & alien invasions. Insidious.  Clearly they’ve been honing their money-separating chops for some time now.

The sick part of it all is that I know  what the purpose behind this “game” is.  It’s nakedly obvious and I don’t even care. You see, I have to level up PooFlinger.  I have to.

One thought on “Help Me I Am Obsessed with Outernauts”